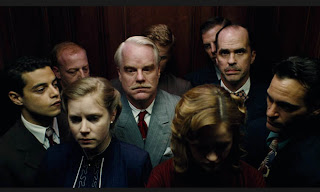 In his review Roger said:


"Paul Thomas Anderson's The Master is fabulously well-acted and crafted, but when I reach for it, my hand closes on air. It has rich material and isn't clear what it thinks about it. It has two performances of Oscar caliber, but do they connect? Its title character is transparently inspired by L. Ron Hubbard, the founder of Scientology, but it sidesteps any firm vision of the cult religion itself — or what it grew into." He finishes by saying "Paul Thomas Anderson is one of our great directors. The Master shows invention and curiosity. It is often spellbinding. But what does it intend to communicate?"


Joaquin Phoenix plays Freddie Quell and Philip Seymour Hoffman plays "The Master" Lancaster Dodd in this film about a charismatic cult leader and the drunken, mentally deranged person he is trying to reform.

The movie opens in 1945 with Freddie in the navy. We don't know if he is damaged because of what he went through in the war, but there is no doubt that he is a wounded soul. Freddie and some other sailors are on a beach and the music in the background is strange and unsettling. The war in the Pacific ends, and Freddie is looking for alcohol. He is later treated by the navy for some form of mental instability.

Back in civilian life Freddie doesn't really adjust too well, ending up in a fist fight with a customer at his photography job. He later almost poisons a fellow worker with his home made alcohol drink. He ends up stowing a way on a boat and there he meets Lancaster Dodd, whose followers call him Master. Dodd tells Freddie that he is a writer, a doctor, a nuclear physicist, and a theoretical philosopher.

Dodd drinks some of Freddie's home made stuff with him, and then exposes him to some of his methods. He "processes" Freddie by asking him a series of questions. He wants to make him his protege. When Dodd is interviewing Freddie he asks him some questions that show us that he is a little out there too. He asks if Freddie is a member of "Any invader force on this planet or anywhere else?"

We see a little of Dodd's philosophy as he is talking to some of his followers. He believes that their current life is only one of many for the spirit which is just using it's current vessel. He says that .. "we are, all of us, working at breakneck speeds and in unison towards capturing the mind's fatal flaws and correcting it back to its inherent state of perfect. Whilst righting civilization and eliminating war and poverty and therefore, the atomic threat." Dodd is clearly a megalomaniac on a mission and so is his wife (Amy Adams).

The movie is quirky, disturbing, fascinating and very well done.

How do cults and religions get started? Mormonism, Buddhism, Christian Science, Islam, Christianity, Scientology ... they all got their start with a charismatic leader, and sometimes with very little else. If that is all the movie was intending to explore, then I think that it is enough. I thought the movie was great on a first viewing, and even better when I watched it again.