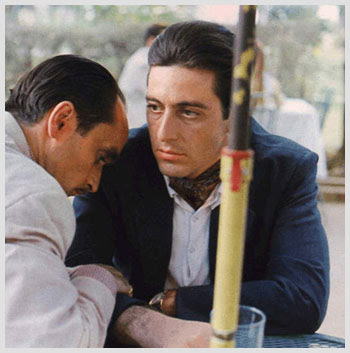 "The flashbacks give Coppola the greatest difficulty in maintaining his pace and narrative force. The story of Michael, told chronologically and without the other material, would have had really substantial impact, but Coppola prevents our complete involvement by breaking the tension. The flashbacks to New York in the early 1900s have a different, a nostalgic tone, and the audience has to keep shifting gears. Coppola was reportedly advised by friends to forget the Don Vito material and stick with Michael, and that was good advice.
There's also some evidence in the film that Coppola never completely mastered the chaotic mass of material in his screenplay. Some scenes seem oddly pointless (why do we get almost no sense of Michael's actual dealings in Cuba, but lots of expensive footage about the night of Castro's takeover?), and others seem not completely explained (I am still not quite sure who really did order that attempted garroting in the Brooklyn saloon)."
He finishes by saying, "But Coppola is unable to draw all this together and make it work on the level of simple, absorbing narrative. The stunning text of 'The Godfather' is replaced in 'Part II' with prologues, epilogues, footnotes, and good intentions."
Roger later added this to his Great Movies series, but in that review (click here) said, "Of all of the reviews I have ever written, my three-star review of 'Part II' has stirred the most disagreement. Sometimes it is simply cited as proof of my worthlessness. I've been told by many that "Part II" is a rare sequel that is better than the original. Have I changed my mind? No. I have read my review of 'Part II' and would not change a word."
What? "Some scenes seem oddly pointless", "Coppola prevents our complete involvement by breaking the tension", "Coppola never completely mastered the chaotic mass of material". You don't want to change any of those words?
If this is now one of your Great Movies, then your first review was way, way off. By the way, fourteen critics and fifteen directors included The Godfather, Part Two in their list of the greatest movies of all time in the Sight and Sound Poll. I think they all probably thought the narrative was pretty absorbing.

Where is Fight Club? Roger hated on this movie when it should be 4 stars easily.

Please, add Deliverance (1972) to your list! I disagree with Ebert about this movie more than any other. I always felt he was wrong about Starship Troopers (1997) as well, but it's less egregious an error to make.

I suggest adding Napoleon Dynamite. Roger really trashed it (1.5 stars), and he really missed the point. Sure, Napoleon is a bit of a nerd, but then again, most of the poeple around him are oddballs of one sort or another. He is a good kid, a self-starter, he gets things done and succeeds, he is loyal to his friends, he doesn't do drugs or hurt people. One of the most original comedies, a classic in my opinion.

Please add South Park: Bigger Longer and Uncut to your list, as Roger's original review gave it 2.5/4 stars. That movie was a slashing commentary on censorship and deserved 3.5/4 or even 4 stars easily. Although it was profane, or perhaps too profane for his liking, it had a great message in it.


Please Please Add Fight Club, it is an 8.9 at imdb, an 81% at rotton tomatoes, and he gave it 2 stars. He justifies his opinion, but come on its in the top ten film of all time on the top 250 at imdb, i love that movie.


Please Please Add Fight Club, it is an 8.9 at imdb, an 81% at rotton tomatoes, and he gave it 2 stars. He justifies his opinion, but come on its in the top ten film of all time on the top 250 at imdb, i love that movie.

"The story of Michael, told chronologically and without the other material, would have had really substantial impact"

It was only released on VHS and has not since seen the light of day. The recut film is rumored to be lost.

It may be hard to imagine, but for my money this 7-hour recut version trumps both theatrical films. I watched the entire film on my cheesy 19" TV with lousy sound in one sitting. I reluctantly took bathroom breaks.

Thus necessity produces art; the Saga is (was) a masterpiece that is more than the sum of its parts.

Fear and Loathing in Las Vegas should be #1...He only gave it one star.

Kind of late here, but I agree with some of the others people are saying to add. One that I haven't seen people mentioning to add that I think should be on here is Never Say Never Again. He gave it 3 1/2 stars, it's honestly the worst Bond movie I've seen. It was cool seeing Sean Connery again and the guy who played Largo made a decent villain, but other than that there is pretty much nothing worth watching in it.

Ebert says, "(I am still not quite sure who really did order that attempted garroting in the Brooklyn saloon)." If I recall correctly, somebody says, "Michael Corleone says hello" before this purposely botched murder. I found this very confusing as well, and had to look up the synopsis to find out that they were trying to frame Corleone. I agree with Ebert that this was unclear, and if you don't figure out that it was a frame job, it's a real snag in the plot.

Of course Ebert was wrong about this movie, the first two Godfather movies are easily some of the greatest films ever made. They deserve 4 stars easily. At least he changed his rating later on, but I always thought he missed the mark the first time he reviewed it. Another film he got wrong was Dead Poets Society, a great movie that he bashed on. I love your website, you should continue making blogs. Your content is great, keep up the good work.