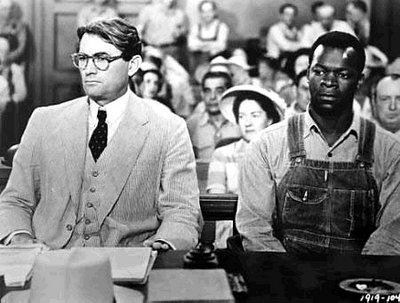 Roger reviewed this great movie in 2001. he said in his review :


To Kill a Mockingbird is, as I said, a time capsule. It expresses the liberal pieties of a more innocent time, the early 1960s, and it goes very easy on the realities of small-town Alabama in the 1930s. One of the most dramatic scenes shows a lynch mob facing Atticus, who is all by himself on the jailhouse steps the night before Tom Robinson's trial. The mob is armed and prepared to break in and hang Robinson, but Scout bursts onto the scene, recognizes a poor farmer who has been befriended by her father, and shames him (and all the other men) into leaving. Her speech is a calculated strategic exercise, masked as the innocent words of a child; one shot of her eyes shows she realizes exactly what she's doing. Could a child turn away a lynch mob at that time, in that place? Isn't it nice to think so.

I think Roger is missing the point of this movie's greatness. Atticus Finch was not a naive man. He knew what the beliefs of most people were at that time in the South, but he had to follow what he knew was right in his heart. He was not a person that followed the mob just to be popular, even though it would have made his life a lot easier.
To Kill a Mockingbird was a very brave movie. The film portrayed the racism that was still a powerful factor in the South, almost one hundred years after the Civil War. The movie also demonstrated what the correct response to racism should be. Morris Dees of the Southern Poverty Law Center said of the story "Set in the Deep South in the 1930s, the poignant story of racial injustice remains timeless. Its influence on my decision to take up civil rights law was profound." He goes on to say "The small-town life that Harper Lee wrote about in Mockingbird may be fading away, but many of the attitudes about race live on. Just as importantly, the deep, underlying structures of racism in our country have not been eliminated. On the 50th anniversary of Harper Lee’s classic, we must dedicate ourselves to the work that remains to be done."
I'm stunned that Roger only gave this great movie, with it's great lessons and great morals, two and a half stars. To say that this is a movie that should not be seen is incredible to me.
To criticize this great movie because "it goes very easy on the realities of small-town Alabama in the 1930s" and to add Gone with the Wind to his Great Movies List just doesn't make any sense. In Gone with the Wind, Big Sam said "Goodbye Miss Scarlett. Don't worry. We stop them Yankees." Talk about going easy on the South! The message of Gone with the Wind was very clear. The people in the South in 1860 and in 1939, were very happy and content with the way things were. They didn't need people from outside telling them that their peculiar institutions were wrong. Atticus Finch was a person who was willing to stand up, even though he was from the South, and do the right thing even if it was unpopular.


Atticus Finch: There are some things that you're not old enough to understand just yet. There's been some high talk around town to the effect that I shouldn't do much about defending this man.
Scout: If you shouldn't be defending him, then why are you doing it?
Atticus Finch: For a number of reasons. The main one is that if I didn't, I couldn't hold my head up in town. I couldn't even tell you or Jem not to do somethin' again.


Remember that when GWTW was made, segregation was still the law in the South and the reality in the North. That the Ku Klux Klan was written out of one scene for fear of giving offense to elected officials who belonged to it. The movie comes from a world with values and assumptions fundamentally different from our own--and yet, of course, so does all great classic fiction, starting with Homer and Shakespeare. A politically correct GWTW would not be worth making, and might largely be a lie.

I can't believe that Roger will give GWTW, a movie that revels in its racism, a pass and take To Kill a Mockingbird to task for going "very easy on the realities of small-town Alabama."
Atticus Finch was voted as the top screen hero of the last 100 years by the American Film Institute. The movie was ranked #2 on the American Film Institute's 100 Most Inspiring Movies of All Time and AFI ranked it as the #25 Greatest Movie of All Time. It's a movie that should be respected and is very easy to love.