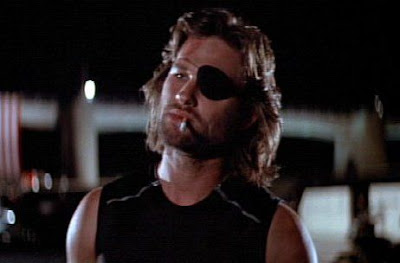 
Roger, for some reason, doesn't post this review at his site, but here it is.

John Carpenter's Escape from New York is a cross between three of the most reliable ingredients in pulp fantasy: (1) the President is Missing, (2) New York is a Jungle, and (3) the Anti-Hero as Time Bomb. Carpenter has gone after an original angle on each of the ingredients, with disappointing results.

The president, for example, would be much more convincing if he were not played as a sniveling wimp by Donald Pleasence (of all people). The movie's New York of 1997 would have been more interesting if it were seen as a genuinely different prison society, rather than as a recycled version of The Warriors. And the anti-hero needs more human qualities and quirks; he seems lifted from old spaghetti Westerns.

These basic problems prevent the movie from becoming more than it is, a competent job of craftmanship. Escape from New York has the misfortune of being a merely good thriller in a summer when the standard has already been set by Raiders of the Lost Ark. And yet it's fun to see old standby science-fiction ingredients rehashed for our cynical times.

The vision of a post-civilization New York has been used in several movies, most memorably in The World, the Flesh and the Devil (1959), in which Harry Belafonte walked down city streets that were all the more frightening because they were simply deserted and quiet.

At the beginning of Escape from New York, we learn that the city was turned into a federal maximum security prison in 1987, and that several years later the island is ruled by prowling gangs who have their own sources of power, food and clout. When we see New York, however, it is essentially just a garbage-strewn junkyard roamed by wild-eyed crazies.

How do people survive there? If the movie had provided specific details, it could have been fascinating. Instead, we get tantalizing hints of how things work; for example, a gang leader (Isaac Hayes) has a small oil well pumping inside his headquarters.

The president has been missing, endangered, kidnapped, blackmailed or otherwise inconvenienced in countless other movies and novels. This time, after terrorists hijack Air Force One and crash it into Manhattan Island, the president escapes inside an ingenious armored pod that is never explained. He is then held hostage, along with a cassette tape that contains the means of preventing World War III. Carpenter's decision to cast Donald Pleasence in the role reminds us that Pleasence added great credibility and psychic weight to Halloween, in the role of the psychiatrist. But he never makes a convincing president.

The movie's plot revolves around the decision of the police commissioner (Lee Van Cleef) to send a convicted criminal into New York to bring the president back alive. The criminal is a Special Forces veteran (he fought, we learn, at Leningrad and Siberia). If he gets the president out within 24 hours, he gets a pardon. If he doesn't, tiny time bombs rupture his major arteries.

The criminal is played by Kurt Russell, a talented veteran of several Disney movies (and of the title role in Carpenter's TV movie, Elvis). Russell is so determined to shake his Disney image that he goes whole hog, with an eye patch, a three-day beard and growl so hoarse he seems to be moaning most of the time. It's an interesting idea for a performance, maybe, but nothing is done to give the character human qualities, and so we're allowed to remain detached about his plight.

A bunch of familiar faces turn up in supporting roles. Ernest Borgnine is the last of the wise-guy New York cabbies, still looking for fares in the jungle. Isaac Hayes is the gang leader, Harry Dean Stanton is his personal advisor, and Adrienne Barbeau is his "squeeze." Making this list, I keep being reminded of the word I started out with: Ingredients. Everything is here, and it all works fairly well, but it never quite comes together into an involving story or an overpowering adventure.

It's not easy to make a dark movie that is fun to watch but I think Escape from New York accomplishes that exceptionally well. It has a comic book tone about it, but it all really works for me.

The measure of a really good movie is that it gets better with each viewing, and Escape from New York certainly does that. It has developed in to a cult favorite because of its iconic leading character. Empire has named Snake Plissken one of the 100 Greatest Movies characters of all time saying "It takes more than an eye-patch to make an icon, something John Carpenter and eternal muse Kurt Russell understood all too well when creating Snake Plissken. But it sure does help. As does nicking a horde of characteristics from great movie tough guys - Eastwood's voice, Marvin's pissed-off attitude - and blending it with Russell's natural charisma. The result? A true one-off: a cranky, hard-as-nails, nihilistic badass that nobody in their right mind would mess with. But we'd heard he was dead."

I really don't think there is anything in this movie that is disappointing. Rotten Tomatoes has it at 82% and IMDB gives it a 7.1 rating.