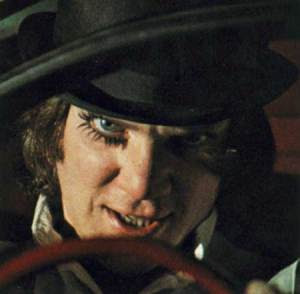 Roger really missed the boat on this one. He starts his review by saying, "Stanley Kubrick's A Clockwork Orange is an ideological mess, a paranoid right-wing fantasy masquerading as an Orwellian warning. It pretends to oppose the police state and forced mind control, but all it really does is celebrate the nastiness of its hero, Alex."
I couldn't disagree with him more. Anyone that watches that movie, and thinks that Alex is a hero must be really twisted. Although there are warnings against the Orwellian state, it certainly does not hold up Alex as someone to be admired. What makes the movie interesting is looking at the savage Alex and the State's response to him. Is it a reasonable response? Is it over the top?
He finishes his review by saying, "In addition to the things I've mentioned above -- things I really got mad about -- A Clockwork Orange commits another, perhaps even more unforgivable, artistic sin. It is just plain talky and boring. You know there's something wrong with a movie when the last third feels like the last half. " Here is the link to Roger's review.
Wow! A Clockwork Orange boring! That is one adjective I would never use in describing it..
I can understand why some people don't like this movie. It can be viewed as being excessively violent and misogynistic. It is definitely not for all tastes. But there are wonderful things in this movie. Using violence to denounce violence doesn't have to be gratuitous, and I definitely don't think it is here. When you look at recent movies like The Green Street Hooligans and The Football Factory we can actually view A Clockwork Orange as being closer to reality than we would perhaps care to admit.
This movie has an 8.5 rating on IMDB and has 6 directors and critics selecting it in the Sight and Sound Poll as one of the Top Ten movies of all time. Roger only gave it 2 stars in his review.
I think if Roger watched it again, with an open mind, he would really like it. What makes it so good is that it is probably even more relevant today than when it was made.

Im glad he gave it a bad review, i love stanleys other movies but this one is just sick to me.
I really hated it.
I'm glad Ebert is not crazy.

but the filmmaking was wonderful, and malcolm mcdowell did a splendid job in this, he even said stanley kubrick let malcolm do all of alex's character development by himself, such as the rape scene where he sings 'singin in the rain' which was unscripted. It's such an amazing shot later on when alex goes back to the writer's house and sings it again, slowly becoming cured of the luduvico technique, and the writer begins to go crazy and drives alex to his suicide attempt, that's my favorite shot. Besides, the political message towards the end where he's being fed breakfast, and being helpless in a cast, crippled by the government as well so now they have to suck up to him, brilliant.

This is one of my favorite movies; I really didn't like it the first time I tried watching it, and stopped watching it before the first third of the movie ended. But, people had a lot of good things (and bad things) to say about this movie, so I gave it a second chance and loved it.

It's one of those movies where there are no real heroes, just villains, and if the viewer doesn't 'get' that, then they're probably just not going to like the movie.

If anything he rated it too high! I know few agree but I thought that movie flat-out sucked and not due to the violence (sidenote: What kind of priss would call out THIS film for its violence? It's about as hardcore as a de-clawed kitten.) but mainly due to the protagonists. Are those really supposed to be convincing villians? I found the "disturbing" scenes laughable because they seem like such pantywaists. So much so that I'm not even clear what the movie is going for in the latter part. Is the viewer supposed to sympathize with Alex or feel he's getting what he deserves? I was so not-invested with him as a character that I honestly can't tell.

If you don't like this movie you're a fool. Don't argue... Fools don't know they're fools

Sick movie you say, Jacob? Funny coming from someone with a Fight Club avatar. Even taking into account the film's supposed message, it's basically one sick moment after another. I love the film, but it's rather hypocritical to talk about another film short of say, The Human Centipede, being sick while being a fan of Fight Club.

The droogs look so silly.
Rape to Singin in the Rain?
Movie is well made, as with all Kubrick, but terribly dated

I think Roger was being a little excessive in his criticism. I think seeing Clockwork upset him to the point that maybe he should have waited a few more days to write a review. A lot of his criticism is not really valid. I have, first of all, never picked up a political bend in this movie, unless you count anarchism I suppose. Kubrick stylizes but doesn’t glorify Alex’s evil deeds and certainly doesn’t excuse them. There’s no explanation needed for why Alex is the way he is, he was born that way. A bad seed born in a futuristic society that is also morally bankrupted. Films about bad people doing bad things require a certain special level of justification for their existence on celluloid. It was intended to be aggressively bizarre and it’s sucess as a film is a testament to Kubrick’s ability to handle that. Clockwork’s craft and impeccable direction are strong assets. The viewer’s relationship with Alex is...complicated. He’s not meant to be anything except what he is: a violent psychopath. Repellant but not without a certain something. But consider a character like Hans Landa in Inglorious Basterds. He’s an evil SS officer who hunts Jews, there’s nothing good about him. But as a character he is brilliantly conceived and so well played by Waltz that there’s a certain level of likability. It’s a great CHARACTER. This is no easy task for a director or an actor. Of course Alex is human garbage, but Malcolm McDowell is also so friggin good at playing this very very bad guy. I don’t consider Clockwork one of Stanley’s better films, but it’s still a very good film with a lot going for it. It’s natural to recoil from the horror of the whole thing, but that doesn’t excuse purely reactionary opinions masqueradng as film criticism.

One of the best movies ever made

Of course, he was wrong, but with that being said, I don’t think it’s one of the best movies ever made. I’d give it 3 or 3.5 stars, not 4. I thought Malcolm McDowell was great as Alex and the story’s commentary is excellent, but it was a bit too long.

I didn’t like this movie as much as you did, but Ebert was too harsh on a good film. I was blown away by Malcolm McDowell’s amazing performance and the social commentary is as relevant today than it was back then, if not more. I think the pacing could’ve been slightly better as I thought the movie was boring in a couple of parts. But overall, I agree it’s way better than a two star film, even if I thought the movie had flaws (I was slightly let down by the ending). I would give A Clockwork Orange 3 or 3 1/2 stars on a scale of 4 stars.