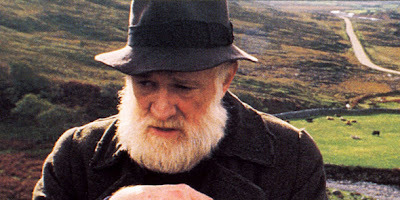 I recently watched this movie and then looked to see Roger's review of it and was stunned to see how much we disagreed. Roger said: "This was not a work that called out to be filmed. Once filmed, it calls out to be forgotten." He goes on to say:


If I were watching this as a play, I might just be able to care about the field, if it were located far offstage. But the motion picture camera has an unforgiving way of photographing anything that is put before it, and so we can easily see that the McCabes, father and son and father's father and all, have been wasting their efforts dragging that wet seaweed up the cliff to fertilize the field, because the village is surrounded by thousands of acres of prime pasturage. Tom Berenger is also on a fool's errand. Why does he need to strip the field when if there is one thing the district has more of than fields, it is mineral rights, and if there is one thing it has no need of, it is gravel? No, this play is not about the field, it is about eternal questions. Questions about (1) a man's right to the land, (2) whether the owner should sell out to the highest bidder and (3) whether the Irish in America have lost their respect for the land and its people, and forgotten the old ways.

Roger missed the point of the movie. It is about the field. The land, particularly after the famines, became the religion to the people. To sell or split the land, which could just barely support a family as it was, could only lead to the ruin of a family and a descent in to another class of people. They would become tinkers, wanderers, gypsies ... something not quite Irish. Bull McCabe was fighting for his family, for his descendants and for his heritage.

In a conversation with the village priest Bull McCabe explains his feelings:


McCabe: Why're you interfering, Father? This is none of the Church's business.
Father Doran: It's the Widow's field. She has the right to sell it. McCabe: No. It's my field. It's my child. I nursed it. I nourished it. I saw to its every want. I dug the rocks out of it with my bare hands and I made a living thing of it! My only want is that green grass, that lovely green grass, and you want to take it away from me, and in the sight of God I can't let you do that!
Father Doran: Can't you find another field?
McCabe: Another field? Another field? Jesus, you're as foreign here as any Yank. Another field? Are you blind? Those hands, do you see those hands? Those rocks! It was a dead thing! Don't you understand?

The movie deserves to be seen for the great acting alone. Richard Harris was nominated for an Academy Award. Sean Bean was really good as Bull's son and John Hurt may have been the best of all in his role as the traditional village idiot.

But I think it goes beyond that. For an understanding of the Irish, to understand the suffering they have gone through, to understand their love of the land, this movie needs to be seen. When Roger says "have been wasting their efforts dragging that wet seaweed up the cliff to fertilize the field, because the village is surrounded by thousands of acres of prime pasturage", I think the Bull answers him best saying: "Another field? Another field? Jesus, you're as foreign here as any Yank. Another field? Are you blind? Those hands, do you see those hands? Those rocks! It was a dead thing! Don't you understand?"

The Bull sacrificed a son and his life for his land and for the field he needed to supplement his land. It is hard for an outsider to understand. It doesn't seem to make sense, but that is the beauty of this movie. The Field tries to explain the Irish, which is not an easy thing to do, but I think this film does it very well.