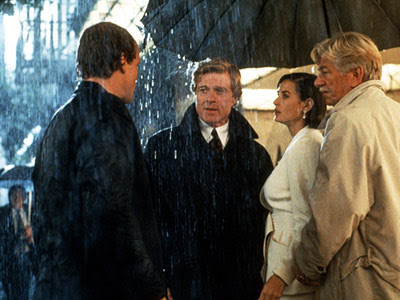 David (Woody Harrelson) and Diana (Demi Moore) are a young professional couple and are doing really well, until the recession hit. Because they had invested their money in building a dream house they ended up losing everything.
David borrowed some money from his Dad, and went to Vegas but they didn't win. Billionaire John Gage (Robert Redford) sees Demi and asks Diana to sit in at his table for luck. Oh course, his luck turns and they win big. Gage buys her expensive gifts and soon they are going to his parties. The creep, Gage, hypothetically offers David one million dollars for one night with Diana. They refuse him but then can't get the offer out of their heads.
David calls his lawyer who draws up a contract and Diana and Gage get together. David soon changes his mind and goes banging on Gage's door, but they are gone, off on a helicopter.
In his review Roger said "Indecent Proposal is in a very old tradition, in which love is put to the test of need and desire and triumphs in the end, although not without a great many moments when it seems quite willing to cave in to passion. It is artificial and manipulative, and in the real world this sort of thing would never happen in this way, but then that's why we line up at the ticket window: We want to leave the real world, for a couple of hours, anyway."
I thought the movie was very far from being in the old tradition. I found it to be crass, shallow, and offensive. This was definitely not An Affair To Remember.
In another review of the movie Roger said "Sometimes when people are talking about certain old movies, they get a little smile on their face, and you realize they are recollecting a guilty pleasure. They know the movie wasn't any masterpiece, and they probably even know why. But dammit all, for two hours it created a fantasy which absorbed them, and allowed them dreams and reveries, fantasies and even lust, and so it has become a pleasant part of their memories. Indecent Proposal is that kind of movie. Goodness has nothing to do with it."
I have to agree that goodness has nothing to do with this movie. It was a long, long two hours for me : certainly no fantasy. Robert Redford acted in forty movies and this one was his lowest rated on IMDB. It won the Razzie Awards for Worst Picture, Worst Screenplay and Worst Supporting Actor. It was also nominated for, but somehow didn't win, Worst Actor, Worst Actress, Worst Director and Worst Original Song.
It has a 5.4 rating on IMDB, a 37% rating on RottenTomatoes and a 35 rating on Metacritics.