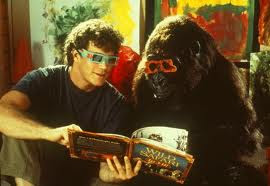 In his review Roger said "Congo is a splendid example of a genre no longer much in fashion, the jungle adventure story. Perhaps aware that its material was already dated when Stewart Granger made King Solomon's Mines in 1950, the filmmakers have cheerfully turned it into an action comedy, and the actors have gone a step further, treating it like one of those movies like Beat the Devil that is a put-on of itself. The result is not a movie that is very good, exactly, but it's entertaining and funny. False sophisticates will scorn it. Real sophisticates will relish it."
I guess I am a false sophisticate. I just didn't get this movie. A talking gorilla, named Amy, and everyone is interested in finding diamonds to make lasers? Why isn't everyone more interested in Amy?
Roger closed his review with "The movie was directed by Frank Marshall, who has worked with Steven Spielberg on his action extravaganzas, and is based on a novel by Michael Crichton, who is said to be unhappy about what they've done with his book. Since it is impossible to imagine this material being played for anything but laughs, maybe he should be grateful."
I don't think the movie was meant to be funny. It is listed as a Action, Adventure, Mystery, Sci-Fi and Fantasy, but not as a comedy. If the movie really was a comedy/drama why wouldn't the people behind the movie let people in on the secret?
When I recently watched this movie again I watched it carefully to see if was actually being played for laughs. I don't think it was. I just think it was a bad movie with bad acting, bad special effects and bad writing.
The movie was nominated for seven Razzies, including Worst Picture, Worst Screenplay, and Worst Original Song. It has a 4.6 rating on IMDB, a 21% rating on RottenTomatoes and one positive review on Metacritic - Roger's.
This is one of those movies that is so bad it just might be fun to watch, but believe me when I tell you, it was no fun for me.