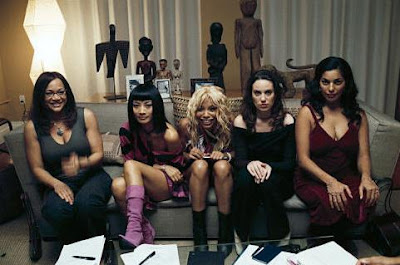 If this movie could talk it would say "She hate me, he hate me, they hate me, everyone hate me except Roger, who gave me 3 stars."
In his review Roger said


Spike Lee's She Hate Me will get some terrible reviews. Scorched earth reviews. Its logic, style, presumption and sexual politics will be ridiculed. The Tomatometer will be down around 20. Many of the things you read in those reviews may be true from a conventional point of view. Most of the critics will be on safe ground. I will seem to be wrong. Seeming to be wrong about this movie is one of the most interesting things I've done recently. I've learned from it.
My guess is that Lee is attacking African-American male and gay/lesbian stereotypes not by conventionally preaching against them, but by boldly dramatizing them. The inspiration for She Hate Me may be his Bamboozled (2000), an attack on black stereotypes that was one of his least successful films. Having failed with a frontal assault, he returns to the battle using indirection. By getting mad at the movie, we arrive at the conclusions he intends. In a sense, he is sacrificing himself to get his message across.
Either that, or I have completely misread She Hate Me, but I couldn't write the obvious review. I couldn't convince myself I believed it. This film is alive and confrontational and aggressively in our face, and the man who made it has abandoned all caution, even to the point of refusing to signal his intentions, to put in a wink to let us see he knows what he's doing.

I'm a big fan of Spike Lee, Malcolm X and Do the Right Thing are two of my favorite movies of all time, but this movie was not good. Roger is hoping desperately that there is something clever in the movie, but even he can't find it.
I think Roger hit it on the head on his At the Movies show. He said "It has enough imaginations and material for three movies, and that becomes a problem since it can't decide which of the three movies it wants to be." Ebert and Roeper's dialogue continues :


Ebert : "She hate me is preposterous, the critics are likely to hate it, but I give Spike Lee credit for being provocative, outrageous and daring in a world of timid and conventional movies, he swings for the fences. I went back and forth and back and forth, on this ... I'm going to give it thumbs up because it was never .."
Roeper : "Wow! Wow!"
Ebert "never boring. It was always intelligent in its film ideas even if the plot absolutely fell to pieces."
Roeper : "Roger this movie was never intelligent from the get-go. I give this movie a big thumbs down and I think it may be the worst movie of the year. I mean first of all, if anybody else made a movie about this black male stud, Spike Lee would be ripping them for trafficking in such obvious stereotypes. Is it supposed to be a parody of stereotypes?"
Ebert : "I think so."
Roeper : " It's just insanely outlandish. None of that stuff has any connection to any real world possibilities that you could ever, ever."
Ebert : "Were you bored during this movie?"
Roeper : "I was amazed, astonished.. that I was seeing such garbage on the screen. The acting is horrible. The music is intrusive and you know there's this whole plot where he's getting in trouble ... this movie knows nothing about an investigation into financial misdeeds. The stuff with the Mafia is third-rate stereotypes of Italians.
Ebert : "You know it's funny, this kind of movie is a real test for a film critic and it was a real test for me because intellectually I know everything you say is true. You're right - it's preposterous. I know that. Yet at the same time he keeps doing stuff. ... This movie is really trying to something in many different ways at the same time and even though it doesn't work it fails, fails in a very interesting and stimulating way and I didn't feel as if I resented losing my two hours."
Roeper : "I guess on one level I can understand what you're saying because I would say to some people you got to see this because it's such a train wreck that you won't believe it but I would say maybe people could wait to rent it to see what I mean. I think it's one of the worst movies of the year."

This was a movie that was supposed to be a comedy, but I don't think there was one funny minute in it. I agree with Roger that it was preposterous and didn't know what kind of movie it wanted to be. Offensive? Racist? Misogynistic? Homophobic? In my view, yes on all counts.
I'm going to agree with Richard Roeper on this one. Only see it if you enjoy watching train wrecks.