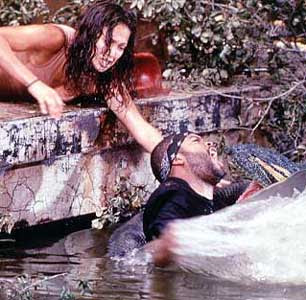 I happened upon a review of this movie by Roger where he had given it 3 1/2 stars. It couldn't be the same movie I had seen. The one I had seen starred J-Lo, Ice Cube, Jon Voight, Eric Stoltz and Owen Wilson and it was almost unwatchable. On IMDB it had a 4.2 rating (that's really low). It has a 28% rating on Rotten Tomatoes. It didn't win any Razzies, but it was nominated for Worst Actor (Jon Voight), Worse Director (Luis Llosa), Worst New Star (The Animatronic Anaconda), Worst Picture, Worst Screenplay and Worst Screen Couple (Jon Voight and The Animatronic Anaconda). It almost ended Luis Llosa's directing career. He only directed one other movie, eight years later, called The Feast of the Goat (I don't think that was too big of a hit either.) But Roger gave Anaconda 3 1/2 stars so I had to give it another chance, I must have missed something.
An expedition financed by National Geographic sets down the Amazon to look for the "People of the Mist", a lost tribe. Along the way the pick up a crazy snake catcher, Paul Sarobe, played by John Voight. He tells them he can lead the group to the tribe.
As the movie went on I came to realize that it was a remake of Jaws. Sarobe played the Quint character and Dr. Cale (Eric Stoltz) played the Dr. Hooper character. It tried to establish mood with music and was very judicious in its use of showing you the monster.
The anaconda picks off the crew members one at a time. In Jaws Dr. Hooper said "what we are dealing with here is a perfect engine, an eating machine." In Anaconda Sarobe says "Anacondas are a perfect killing machine." The remaining crew members jump and then tie up Sarobe who was intent on catching the snake for the money.
If John Voight played this movie as a goof, he was great, but I don't think he did. Ice Cube was my favorite actor in this movie. He kept looking around wondering what the heck he was doing on the boat and saying things like "That's it, man. I'm getting the hell back to L.A". He misses "the playoffs and a six pack" and "LA traffic and my cellular phone." J-Lo's character in the movie, Terri says "This film was supposed to be my big break, it's turned out to be a big disaster." I love truth in movies. As camp, Anaconda was very good, but as the drama I think it intended to be, it was really, really bad. Was it so bad it was good? Maybe.

Sorry. I think that Ebert was one of the few people who really GOT this movie... maybe not quite 3 1/2 stars worth, but it was much better than it should have been... and particularly within this genre, it really stood out. It was a fun and exciting movie and it was eminently entertaining. I certainly would have given it at least 3 stars.

Roger Ebert gave Anaconda 3 1/2 stars? Seriously? I can enjoy a fun action horror romp when it’s done well, but this movie was terrible with really bad writing, special effects, and acting. I don’t understand why he liked this film so much and he had the gall to criticize other classic films with such a high vitriol. This is probably one of the worst movies I ever saw, it deserves the negative reviews that it got. 1 star at the very most.

Roger gave this bad film a positive review, this has to go down as one of his worst in his entire career.