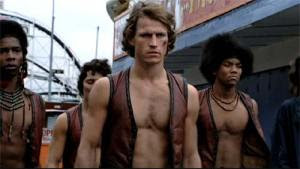 In his review Roger says that "Paramount chooses to advertise the movie as a violent action picture -- and action audiences, I suspect, will find it either incomprehensible or laughable." Roger only gave the movie 2 stars.
I think Roger was wrong in his prediction. The movie has a 7.6 rating on IMDB and a 93% Fresh rating on RottenTomatoes. It was also named the 16th greatest cult film of all time by Entertainment Weekly.
I don't think that was fair of Roger to criticize the movie because he feels it was marketed as an action picture and he doesn't feel it was effective in that genre. You have to judge the movie on its own merits. The director may have had a different view of the material then the publicity department.
I think the movie is entertaining and exciting. I don't think it was ever meant to be a realistic portrayal of urban gangs. It was stylized and had more of a live action comic book approach to reality, and I think it did that very well. In the Director's Cut the transitions between scenes often have the live action sequence fade into a still-frame illustration.
What I like best about The Warriors is that it is presented in a comic book style tone, but the characters always take themselves seriously. There are no winks to the camera to let you know that it is all a joke.
I think that if Roger took another look at this one today, he would add on a couple of stars.

A lot but not all films often regarded as 'cult films' often have characters who look or dress in odd ways, like the Rocky Horror Picture Show, Freaks, Escape From New York and Pink Flamingos. I often wonder if the Warriors would be as remembered and beloved as it is if all the gangs dress like realistic street gangs instead of those ridiculous costumes. I like the Warriors okay, but I'm closer to agreeing with Roger than with most fans of the movie. I don't think he's out of line calling it an action movie, because while it does have that comic book style, the premise of the movie is "A group of people are at point B, where everybody's trying to kill them, and they need to get to point A", and anybody going into this movie is probably going in to see the Warriors run away from and fight all the other gangs trying to get them. And while I find the action scenes relatively well done and exciting, I feel they only service a cheap thrill. The stakes in this movie aren't that high. The Warriors need to get from point B to point A or else they'll die. There isn't anything wrong with the film having a simple premise, but having a simple premise should allow a filmmaker more room to add a context for it to matter. Die Hard has a simple premise that works wonderfully because John McClane is given the time he needs to be realized as a character we like a care about, and there's a reason it matters he stops the terrorists, not only because he's the only person in a position to help, but also one of the hostages is his wife and we want to see them resolve their petty disputes. Also *spoilers*, when Ellis, a d-bag McClane just met and probably wouldn't've even liked is killed, it tears McClane up that he couldn't save him because human life matters to him. Why do we care that the Warriors need to make it back to Coney Island? Cyrus's proposed treaty dies with him at the beginning, so it's not like escaping will be able to salvage that. What function do they serve in this world that would go unserved without them? Is their reputation at stake? What is important to them where they have to live? What emotional of psychological consequences would they encounter if only a few of them make it? What about their personality should we find likeable? They all have the same interchangeable wannabe macho persona and attitudes that make them impossible to distinguish apart, except for Ajax who is way more stupid, macho and unlikeable that the other Warriors. Our heroes in Predator are more distinct, likeable, and in all honestly macho personalities that any of the Warriors. They only matter because they're gang name is also the title of the movie. Also, most of the opposing gangs aren't really that threatening. The Rogues are cowards and their leader feels like he has something to prove rather than an actual thug. The Punks ride roller, which is hardly suitable combat gear. And the Baseball Furies... are you serious? They run like sissies, and also everything else about them. I mean just look at them. They look utterly ridiculous. People talk about the Warriors like it's a truly memorable cinematic experience, and to me, it has enough stylistic flairs, action sequences and competent direction to make it a decent time waster. I really don't see why this film is as loved as it is.

Think outside the box - movies like Die Hard have you conditioned to expect the entire thing spoon-fed to you. The Warriors, like all the other gangs have youth and potential on the line, to make it worthwhile to see them survive. They are the future - why do you think at the end Swan says that after this experience, he's ready to leave, to get away from that life? The director emphasized the dirtiness of NYC - I don't think it was ever QUITE that awful - making it seem apocalyptic. And it is an apocalypse when the youth all kill each other off.

CAN YOU COUNT, SUCKAS? THIS MOVIE DESERVES FOUR STARS.

What makes the warriors so great? The meaning. The meaning of the movie and the novel is so deep. Just study it and you'll agree that this is one of the best movies ever made.