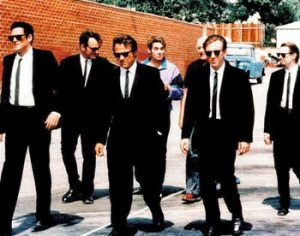 Another great movie that Roger gave a thumbs down. It has an 8.4 (!!!) rating on IMDB. Roger says in his review "The movie feels like it's going to be terrific, but Tarantino's script doesn't have much curiosity about these guys. He has an idea, and trusts the idea to drive the plot."
I'm sorry, Roger, but the movie is terrific just as it is. It has a 95% rating on Rotten Tomatoes.
A little gruesome (maybe more than a little) and not for all tastes, but a great movie that really needs to be seen.
Roger, this is one thumbs down you really need to take back.
At The Movies Review

It is only natural that a director's first film set the template for what is to follow, and it is also only natural that a director's first film be unpolished and show a certain lack of precision compared to what is to follow. Quentin Tarantino is most certainly no exception. We have here the usual: ultra-violence, ultra-profanity, pop culture jokes - but what comes across most is a certain style over substance. The opening scene is witty, naturalistic, and almost entirely irrelevant to what is to come. Tarantino's trademark tone is here, obviously, but it does not come together as a natural part of the story as in his most recent film, Django Unchained. And having viewed that film, the thing most surprising is how little if any of the violence presented here is actually to be enjoyed. The film comes across more as a strangely realistic portrayal of how nightmarish and paranoia-inducing the life of crime really is - working with dangerous psychopaths, being unable to truly trust anyone, and the possibility of all those people who are more than willing to kill turning on you at the drop of a penny. The film does work very well, however, as simply an entertaining, slightly unconventional, portrayal of the aftermath of a crime caper. The characters are definitely dynamic and memorable. The tension is ratcheted up beyond belief, keeping the viewer on their toes, afraid to look away and wanting always to know what will come next, until the film can naturally end only with the most rash Shakespearean sparks of violence to leave all resolved. What's a bit strange is how old-fashioned it is. Just as in any gangster film released during the Hays Code, all wrong-doers are punished, innocent victims or no innocent victims.

Roger actually did take this one back. If I remember correctly he said he just didn't get it at the time, but in going back to it he enjoyed the film.

what a strange concept. expecting a movie reviewer not to have a mind of their own but to agree with the bulk of subsequent viewers. i just re-watched this film 25 years after it was made and it certainly isn't perfect. Ebert was right to analyse it and bravely state an opinion

I liked Roger, but he was way off the mark here. This is one of his worst reviews in my opinion, along with him panning Blue Velvet, Die Hard, The Usual Suspects, A Clockwork Orange, Dead Poet’s Society, To Kill a Mockingbird, Unforgiven, Full Metal Jacket, and the Thing and praising Home Alone 3, Cars 2, Mad Max Beyond Thunderdome, 2012, Anaconda, Gigli, Space Jam, Lara Croft: Tomb Raider, Speed 2, Van Helsing, Paul Blart, and Space Chimps. Sorry Roger, but Reservoir Dogs is a great movie and one of Tarantino’s best films. There have been a lot of good movies that he has panned and some really bad movies that he gave too much praise.