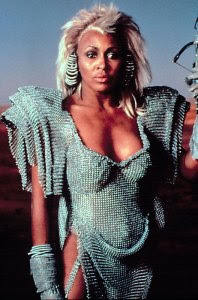 I liked the first two Mad Max movies but the third one in the series was tough to watch. Roger, on the other hand, loved it. He said in his review that "Sequels are not supposed to be better than the movies that inspired them. The third movie in a series isn't supposed to create a world more complex, more visionary and more entertaining than the first two. Sequels are supposed to be creative voids. But now here is Mad Max Beyond Thunderdome, not only the best of the three Mad Max movies, but one of the best films of 1985."
He also said, "The fight between Mad Max and Master-Blaster is one of the great creative action scenes in the movies." and finishes by saying "This is a movie that strains at the leash of the possible, a movie of great visionary wonders."
It's amazing to me that he could have liked this movie that much (he gave it 4 stars!!). I watched it again just to make sure that I hadn't missed something. I don't think I did. I like science fiction and I really like post-apocalyptic films. But this film was slow, preposterous and desperately searching for a plot, but it seems that Roger liked it better than Blade Runner. On IMDB it has a rating of 5.9. Everyone makes mistakes sometimes and I think Roger made a big one in this review.

While I agree that Beyond Thunderdome isn't nearly as good as Mad Max or The Road Warrior, 2/4 seems a little harsh. I found it very enjoyable. It was lacking fast cars and motorcycles like the first two movies had, but it was still a solid movie nonetheless.

I'm sorry, but I wholeheartedly agree with Roger's conclusion. The movie is both terrifically crafted and wholly original. When it borrows, it borrows from the best. The whole assembly was like Mad Max's take on the Indiana Jones trilogy. The Thunderdome sequence was one of the best battle sequences put to cinema. Although there is only one chase sequence, reserved for the climax, it is the series' best, building upon what made the second movie's such a milestone.

Beyond Thunderdome was a tepid bit of filmmaking. The kids were a bad idea, the slapstick was even worse, and the only decent part (the chase) was an uninventive retelling of the chase that ended Road Warrior. The only good ideas are in the first half hour, after that its forgettable.

I was disappointed when I saw this in a theater as a teen; it was so different from what I wanted, so sideways to the Mad Max experience. But it haunted me, and when it came out on video, I grabbed it again. This time I was enthralled.

All professional critics get so bogged down with genre films - they see them every day - so they tend to overpraise the quirky films that manage to surprise them. But Beyond Thunderdome deserves the praise; it really lingers as a strangely complete world, and injects some odd themes of hope amidst the weirdness. I gotta side with Roger on this one.

"Tepid" is a good word to describe Thunderdome. I like it on some level but it's a very mixed bag and the filmmakers strayed too light for this series. George Miller of course had very little to do with this movie so the other director George Ogilve helmed most of it. I'd probably rate it 2.5 stars, right on the cusp between "just OK" and "good."

I agree with Ebert on this one. I found MM:BT to be a fun romp. Maybe that's the problem some have with it; the fact that it lacks the seriousness of the first two, but I think it managed to work as a slightly tongue-in-cheek adventure with an Indiana Jones feel, even if it does stray from the serious tone of the first two. Hell, who wants every movie in a series to be exactly alike anyway? I do disagree that it's the best in the series (that would be 'The Road Warrior'), but it's still a great flick.

You're being really generous giving this movie 2 stars. It's the worst action movie I've ever seen, and I've seen A LOT of horrible action movies. This film is so ridiculously overpraised, I can't believe the critics gobbled this shit up! Best Mad Max movie? Are you kidding me Roger?

I agree with Ebert's minority opinion that this is the best of the Mad Max movies. I love the world-building; that Bartertown is this outpost with its own rules and politics, and what I consider the genius of how the world as we know it is interpreted and mythologized post apocalypse. For example, the pageantry of Thunderdome plays out like a perverse game show. And that iconic Thunderdome scene has to be one of my favorite action scenes of all time. So often imitated. Max's desperation to clutch that whistle, the sound of the chainsaw, the reveal of Master. All exhilarating.

Many people disparage the "Peter Pan" tribe of children that makes up the second half of the film, but for me here is where the concept of this future really gets interesting. These kids are too young to remember anything of the world before the apocalypse, so their society has reverted to tribalism, worshiping a phantom whom they think will return and save them, who also happens to look like Max. Gradually their story unfolds and we see how they were abandoned. Trinkets like a Viewfinder are their relics of the past and the only clues they have to interpreting their history ("Mrs. Walker!" haha).

One of my favorite movies. Fury Road was great but I was disappointed it didn't expound on the post-apocalyptic society that Thunderdome built. I'll never understand how people don't consider it a great movie, except that it wasn't what people expected from Mad Max. At least I'm in good company with Roger.

I liked it even less than you did, to me, this was a boring and poorly written snoozefest. I can’t believe that Roger not only gave this movie a thumbs up, but also gave it 4 stars. And to think, he didn’t like Die Hard, The Usual Suspects, Blue Velvet, A Clockwork Orange, Goadiator, Full Metal Jacket, Reservoir Dogs, The Thing, Unforgiven, and Dead Poets Society.