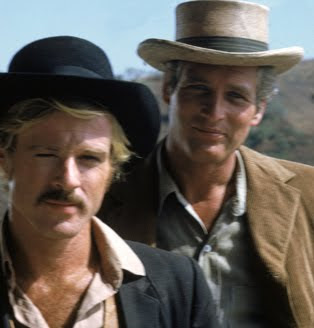 From that most irreverent of years, 1969, came the great Butch Cassidy and the Sundance Kid. The movie starts with the intro : MOST OF WHAT FOLLOWS IS TRUE.
Roger in his stunning review (I was stunned when I read it) said "The problems are two. First, the investment in superstar Paul Newman apparently inspired a bloated production that destroys the pacing. Second, William Goldman's script is constantly too cute and never gets up the nerve, by God, to admit it's a Western."
He went on to say "But unfortunately, this good movie is buried beneath millions of dollars that were spent on 'production values' that wreck the show. This is often the fate of movies with actors in the million-dollar class, like Newman. Having invested all that cash in the superstar, the studio gets nervous and decides to spend lots of money to protect its investment."
Roger's 2 1/2 star review means that he thinks you should take a pass on it. Wow!
Rotten Tomatoes has it at 91%. AFI has it listed in their Top 100 movies of All Time, 100 Best Thrillers, 100 Heroes and Villains and 100 Songs. They also had it listed as #7 Best Western of all time. It had The Searchers, High Noon, Shane, Unforgiven, Red River and The Wild Bunch listed above it. That is a pretty fast crowd to be riding with.
IMDB has an 8.2 rating for this movie. In 2003, the film was selected for preservation in the United States National Film Registry by the Library of Congress as being "culturally, historically, or aesthetically significant".
I loved this movie when I was young, and I still love it today. This is definitely a review that Roger needs to revisit.