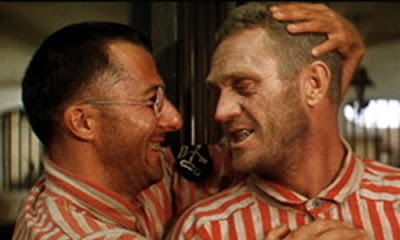 The Rotten Tomatoes synopses on this great movie says "Franklin J. Schaffner (Patton) directs this true story of Henri Charriere (better known as Papillo or "the butterfly"), a prisoner so determined to escape the notorious Devil's Island, he attempted it multiple times until he reached old age. Steve McQueen plays Charriere, and Dustin Hoffman is very good as the hero's anxious, defenseless friend. Based on Charriere's own memoir and uncompromisingly adapted by screenwriters Dalton Trumbo (Johnny Got His Gun) and Lorenzo Semple Jr. (Three Days of the Condor), the film is tough going (it is set, after all, on Devil's Island) but not gratuitously violent. There are sequences that stay with one for a long time, such as Papillon's brief stay at a leper colony and the long periods of starvation and solitary confinement he endures after each attempted flight."
This is a movie that stays with one for a long time. Just to see two great actors, Steve McQueen and Dustin Hoffman, at the height of their powers, play off each other, makes the movie required viewing.
The movie is long (151 minutes) and at points a little slow, but it is always fascinating. in his review Roger said "Papillon is a movie like that: an expensive, exhaustive, 150-minute odyssey that doesn't so much conclude as cross the finish line and collapse. It has been outfitted with expensive stars and a glossy production, but it doesn't really make us care. When Steve McQueen finally escapes from Devil's Island we're happy more for ourselves than for him: Finally we can leave, too."
He goes on to say "At some point in the movie's pre-production, the theory apparently was held that we'd get interested in the contrast between Papillon, the man of action, and Dega, the gentle intellectual. The chemistry of McQueen and Hoffman was supposed to help. That was the theory, but in practice, we don't care because the characters never really escape as people. Hoffman is using his limp again from Midnight Cowboy, and McQueen squints into the sun a lot, and that's about it."
Although the movie is a little long, and perhaps a little slow, I thought the acting was tremendous, and the story fascinating. I wish they made more movies like this today.
It has an 8.0 rating on IMDB and a 92% rating on Rotten Tomatoes.