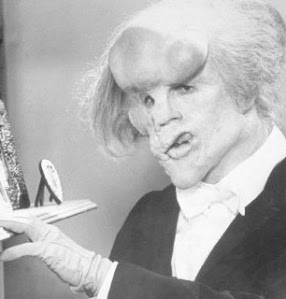 Roger was not really fond of this great movie. He says in his two star review "I kept asking myself what the film was really trying to say about the human condition as reflected by John Merrick, and I kept drawing blanks. The film's philosophy is this shallow: (1)Wow, the Elephant Man sure looked hideous, and (2) gosh, isn't it wonderful how he kept on in spite of everything?"
I think Roger missed the point of the movie. The movie explores what it means to be human. At first even Dr. Treves thought John Merrick was probably an idiot. He is stunned when he finds out he had judged the book by its cover.
I think the movie strongly makes the point that people shouldn't be treated differently just because they look or sound different. Is this really a shallow point? Maybe it is simplistic and obvious, but it must be remembered that we have a history of judging people by how they looked and it lasted for over two hundred years in this country.
John Hurt's makeup was made from casts of Merrick's body, which had been preserved in the private museum of the Royal London Hospital. It was so convincing that the Academy of Motion Picture Arts and Sciences was prompted to create a new category for Best Make-up for the Oscars because of this movie.
This very moving movie was nominated for eight Academy Awards including Best Picture. It has an 8.4 rating on IMDB and a 91% rating on Rotten Tomatoes.

This is the film review I think Ebert got the most wrong of any he wrote during a long and distinguished career writing opinion about film. When it came to this one film, his thinking was backwards, for whatever reason. He says that because Merrick had no choice but to to deal with his condition, there's nothing noble about his doing so. By this logic, people who wreck their lives voluntarily with dubious choices and wind up in a mess would be more noble than Merrick. Do we really believe that? Of course not. No sensible person would. Merrick may not exactly have exhibited grace under pressure. But in dire circumstances, his spirit proved indomitable. There's a lesson there. There is a weird Grinchiness of spirit Ebert displays in that review (masquerading as clear-eyed unsentimentality, of course) that has leavened my esteem of him as a critic. He was very good, but not infallible in his opinion by a long shot.