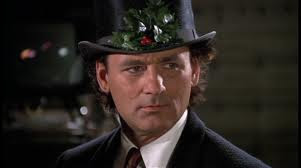 In his one star review Roger said:

`Scrooged" is one of the most disquieting, unsettling films to come along in quite some time. It was obviously intended as a comedy, but there is little comic about it, and indeed the movie's overriding emotions seem to be pain and anger. This entire production seems to be in dire need of visits from the ghosts of Christmas.

Bill Murray has kind of snuck up on me as one of my favorite actors. He is one of those actors who I just enjoy seeing up on the screen. Caddyshack, Stripes, Tootsie, Ghostbusters , Quick Change, What About Bob?, Groundhog Day , Ed Wood , Wild Things , Rushmore , The Royal Tenenbaums , Lost in Translation , Coffee and Cigarettes , The Life Aquatic with Steve Zissou , Broken Flowers , Get Low , Moonrise Kingdom and Zombieland are all on his impressive resume. In some of these movies he was just supposed to have a small part, but he made the movie.

I don't think that Scrooged was one of his best, but I still enjoyed it when I recently saw it on Netflix. Bill Murray played a jerk who was president of a television station, He only cared about himself and making money. He is currently scheduling a live performance of A Christmas Carol not caring that the crew is going to have to work on Christmas Eve. He gets visited by the ghosts who show him his past, present and future and it seems like Frank Cross finally gets the message.

The movie has a 6.9 rating on IMDB and a 67% approval rating with the audience on Rotten Tomatoes. Not a great movie but much better than the one star Roger gave it.