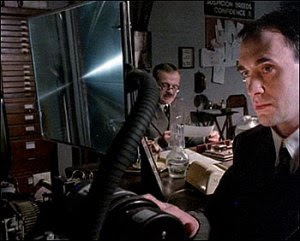 T.V. Interviewer: What do you believe is behind this recent increase in terrorist bombings?
Mr. Helpmann: Bad sportsmanship. A ruthless minority seems to have forgotten certain good old-fashioned virtues. They can't stand seeing the other fellow win. If they played the game, they'd enjoy life more.


Brazil is about a totalitarian society where following bureaucratic code is more important than doing what is right. The totalitarian state exists to protect itself. The movie has a great look and some great dialogue. I thought it worked as comedy, science fiction and drama.
Roger says in his Two Star Review :
"The movie is very hard to follow. I have seen it twice, and am still not sure exactly who all the characters are, or how they fit.
Perhaps it is not supposed to be clear; perhaps the movie's air of confusion is part of its paranoid vision. There are individual moments that create sharp images (shock troops drilling through a ceiling, De Niro wrestling with the almost obscene wiring and tubing inside a wall, the movie's obsession with bizarre duct work), but there seems to be no sure hand at the controls."
The movie may be more style than substance but it has tremendous style. It also is a really funny look at the totalitarianism that can be caused by bureaucracy. Perhaps, not the most lucid of plots, but it is still tremendously entertaining.
Giving a movie that has an 8.0 rating on IMDB and a 98% rating on Rotten Tomatoes a 2 star rating has got to be a pretty big mistake on Roger's part.

Agreed - but Roger wasn't alone on this one. Brazil was such a radical departure from anything anyone had seen before, even Leonard Maltin saw it as a movie where Gilliam just "blows things up". Sci-Fi with comedy/satire never seemed to gel with critics in the 80s, most not knowing what to make of it (just look at reviews for Buckaroo Bonzai). To the unprepared, Brazil can be bewildering, and its pre-release bad press didn't help any. Yeah, he got it wrong, but so did so many others. To get this film on the first go would take a visionary critic on one of his best days.

So this one gets flack for being style over substances, but Pulp Fiction, the biggest offender of them all, is one of his favorite movies? I definitely disagree with Roger on this one.

This movie is a work of art. I think the problem is that people had a hard time discerning between the protagonist's fantasies and the bizarre reality of the Brazil universe.