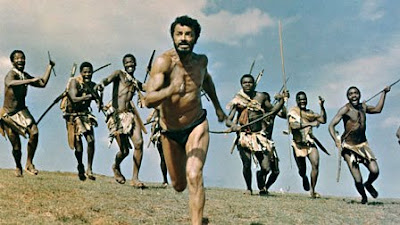 This is a movie that has stood the test of time. I remember watching this in my youth and being scared to death. The story starts in Africa with a safari led by guide Cornel Wilde (who also directed). When his boss insults the local natives, the safari is attacked and the white men are taking hostage.
The first man is tied up with his face held up. A cobra is then released in front of him. A second man is baked inside of a clay pot and then slowly cooked alive over the fire (this is the fate that gave me nightmares). The third man, Cornel Wilde, is given a head start and then seven hunters start to pursue him.
If you have seen Apocalypto, you know what is to follow. Cornel Wilde makes his way across the harsh terrain, fighting off nature and his pursuers. The camera stops and observes scenes from exotic Africa as he makes his way towards freedom.
Martin Scorsese, in his review of Apocalpto and The Naked Prey, said of Cornel Wilde " He was a pleasant actor, but you would never guess from his performances that he would develop into such a good filmmaker. The Naked Prey is his best film, I think (I'm also fond of Storm Fear), and it was quite unlike anything else made in 1966, a sort of throwback to the Ernest Schoedsack–Merian C. Cooper productions of the early '30s, particularly The Most Dangerous Game."
Roger in his review said "It's not entirely their fault. Wilde is simply too much for them. He drops nimbly out of trees, creates decoys, builds forest fires and at one point gets advance warning when a native steps on a twig. These must be the very natives James Fenimore Cooper used. Mark Twain observed that if there wasn't a twig for miles around, and one was needed to give Natty Bumpo warning, Cooper's warriors would seek it out and step on it.
One of these days maybe the Africans will get to be in a movie where they hunt the hero down and catch him. I wonder if that one will be filmed in South Africa, too."
Roger's review is insightful and intelligent. I had seen the movies a dozen times and had never thought about it from that perspective. 1966 South Africa, and the white man is dropped down among the natives and emerges victorious. It has been done in a slew of movies : The Last of the Mohicans, The Last Samurai , The Phantom and the Tarzan movies to name a few.
However, while Roger's review may have made sense for 1966, I think that this is a movie that has held up very well. It compares very favorably with Apocalyto.
So while I may agree with Roger may from a political point of view for 1966, I think from a cinematic point of view he has greatly underestimated this very good film.