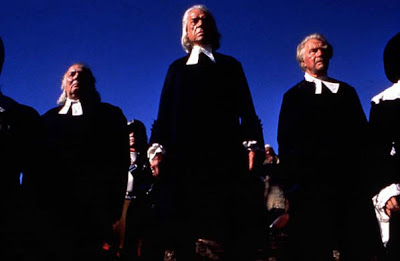 The screenplay for The Crucible was written by Arthur Miller, who also wrote the play. It is probably one of the most discussed and most interesting plays ever written.
The movie is based on the Salem Witchcraft Trials of 1692. The movie contains characters and events that are drawn from history, but some of the events have been fictionalized for dramatic effects and to make Miller's metaphorical exploration more effective.
Paul Scofield, who plays Judge Danford, says "A person is either with this court or against it. There is no road between. This is a new time. A precise time. We live no longer in the dusky afternoon when evil mixed with good, and befuddled the world. Now, by God's grace the good folk and the evil entirely separate."
In addition to examining the Witch trials, Arthur Miller was also examining the House Un-American Activities Committee hearings, before which Miller was called to testify in 1956. The Crucible was Miller's way of striking back at the political tyranny of the times.
In his review Roger said "The characters I believed in most were Elizabeth Proctor, the Rev. Hale, and Judge Danforth. As written and acted, they seem like plausible people doing their best in an impossible situation. Too many of the others seem like fictional puppets. The village girls in general (and Abigail Williams in particular) don't even seem to belong to the 17th century; as they scurry hysterically around the village, they act like they've seen too many movies. And as John Proctor, Daniel Day-Lewis has the task of making moral stands that are noble, yes, but somehow pro forma. The Crucible is a drama of ideas, but they seem laid on top of the material, not organically part of it."
Roger just didn't seem to think the material came together well. I think the movie was good on many levels. I thought the movie was a great examination of 17th century America. How many movies have examined this time in American history? I also thought the McCarthyism themes that run through the movie make it fascinating viewing. The acting, especially by Daniel Day-Lewis, Joan Allen and Paul Scofield was great. James Berardinelli, in his review says "This version illuminates the story's numerous strengths, resulting in a motion picture of surprising emotional and intellectual impact. By re-interpreting this classic so effectively, Hytner has assured that at least one version of The Crucible will become a part of film history."
The movie doesn't have a tremendous amount of action but if you like American history you will probably love this examination of 17th century America. It has a 6.9 rating on IMDB and a 71% rating on Rotten Tomatoes.

I’d give it 3 stars, I think the movie is good, but is kind of carried by the acting, however great performances from Winona Ryder and DDL make the film worthwhile IMO. I do agree with Roger that the movie definitely could’ve been better though.