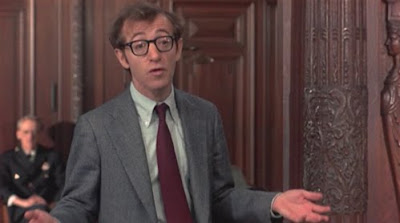 The movie starts out with film clips of the early 50's to set the tone. The clips included Senator Joe McCarthy's wedding, bombing raids on Korea and a family entering a backyard air raid shelter.
Woody Allen plays Howard Prince, a cashier who is a bookie on the side. He is a loser who borrows from his brother and has trouble paying off winners.
He isn't a bad guy though and when a friend, who is blacklisted, comes and asks him to act as a "front" for his scripts, Howard readily agrees. He soon picks up a couple of other "clients" on whom he makes a 10% commission. As usual, money corrupts, and Howard turns into a jerk.
The movie has some funny moments. Howard talks to a girlfriend who thinks he is a great writer.
"What do you think of sports?"
"I like swimming."
"Swimming isn't a sport. Swimming is what you do so you won't drown."
This kind of comic relief works to counterbalance the tragedies that were happening to the blacklisted writers and the people around them.
One thing that I found very interesting in The Front is that the writers admit that they are Communists. This is much different than the movies in the 1950's and 1960's where the accused had been Communist sympathizers in the past. This movie, made in the 1970's, is saying it wasn't right to persecute the writers even if they were Communists.
The movie leads to some HUAC type fellows giving Howard a hard time. They say things like "To be a spy on the side of freedom is an honor" and implies that true patriots are willing to spy on their friends. The very important issue of what is best for the country vs. individual freedom is explored very well by this movie.
The ending of the movie shows that even an amoral character like Howard can see through the evils being perpetrated by the HUAC like groups. One of the most effective parts is the end credits where many of the actors, including Zero Mostel, are listed as being blacklisted in the early 1950's.
Roger says in his review "Martin Ritt's The Front is the victim of its own publicity. For months, we've been promised this serious film treatment of McCarthyism and the show business blacklists of the early 1950s. We've heard about Woody Allen in his first serious role, and about how the film's director, its author and two of its stars were themselves blacklisted. We expected an indictment of a shameful chapter in American history.
What we get are the adventures of a schlemiel in wonderland. Now those in themselves wouldn't make a bad movie, and The Front has its moments. But they often seem to be moments from a Woody Allen movie -- scenes where the insecure Allen character tries to appear competent and win the girl who's taller than he is, all at once. If The Front had simply settled for being that kind of movie, we could relax and enjoy it. But it keeps pushing for a larger statement, and since the issues involved are totally outside the comprehension of the central character, the movie falls apart."
I disagree with Roger. I think the movie very effectively examines a very serious subject, but does so in an entertaining way. They made the movie, and the topic being covered, accessible to the general movie going public.
Rotten Tomatoes rates the movie at 75% and IMDB has it 7.3. I think Vincent Canby in his review sums it up pretty well : "The Front is not the whole story of an especially unpleasant piece of American history. It may be faulted for oversimplification. Mr. Ritt and Mr. Bernstein, both veterans of the blacklist, are not interested in subtleties. Yet even in its comic moments The Front works on the conscience. It recreates the awful noise of ignorance that can still be heard."
And I think that everyone, particularly the youth of today, need to hear about that ignorance.