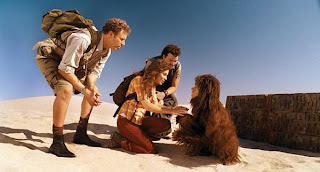 This is not normally a movie I would have seen. I'm not a slave to ratings numbers but I do check IMDB and Rotten Tomatoes. On IMDB I usually watch movies that have over 7.0. On Rotten Tomatoes I watch movies over 70% fresh. This was 5.3 on IMDB and 26% on Rotten Tomatoes. But I was in the mood for something light, I like Will Farrell, the library had it for free and Roger gave it 3 stars so ...
After 10 minutes I wanted to turn it off. The writing couldn't be that bad in the first ten minutes and get good later on could it? They were supposed to hook us in the beginning - no? Well I wasn't hooked.
To describe the plot is almost impossible. It's almost like it was written by a five year old. The jokes are as bad as they can be. The movie has no redeeming qualities. Pre-teens might like it but the humor is too gross for them and it is too infantile for anyone older. So it is a movie without an audience.
The one segment that I did like was when Will Farrell started running and shouting "Try running in a serpentine pattern. He's incapable of rapid course correction. Serpentine everyone. Serpentine! Serpentine! Serpentine!" It, of course, reminds you of that great Alan Arkin and Peter Falk movie, The In-Laws (1979). Now there was a funny movie. This scene brought the only smile of the night to my face, not because of the scene itself, but because of the scene that I thought of when I saw it.
Roger ends his review by saying "I guess you have to be in the mood for a goofball picture like this. I guess I was. Marshall Fine says it's worse than Night at the Museum, but I've seen Night at the Museum, and Marshall, this is no Night at the Museum".
Neither of these movies are any good. Why argue which is worst? Neither should be seen. That is what film critics are supposed to do - warn us about dogs like this. I've got a suggestion for you. Don't see this movie. Do everyone a favor. Then they won't make any more movies like this. Want to see a good movie? Get The In-Laws, 1979 version. (It was remade in 2003 but don't let me get started on that...)

Hasn't anyone here seen a Bill & Ted movie? He gave Bogus Journey 3 stars, but I doubt he'd get the flak he gets for Land of the Lost from that one. Land of the Lost almost seems like "Bill & Ted"'s spiritual successor.