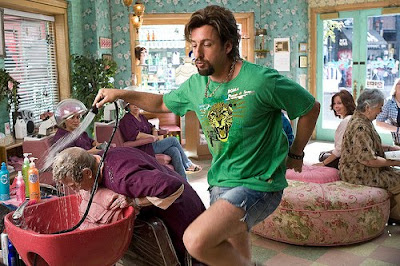 I like Adam Sandler and I love John Turturro but this movie comes very close to being unwatchable. I wasn't going to see it, but the library had it, and Roger gave it 3 stars.
The movie is about a Mossad agent fakes his death so he can re-emerge in New York City as a hair stylist. His arch-enemy, a Palestinian agent named the Phantom, arrives in New York and their battle continues.
The movie had humor that seven year olds may have found funny, but the material was totally inappropriate for children. So who does that leave to like it?
Roger says in his review :
"Sandler works so hard at this, and so shamelessly, that he battered down my resistance. Like a Jerry Lewis out of control, he will do, and does, anything to get a laugh. No thinking adult should get within a mile of this film. I must not have been thinking. For my sins, I laughed. Sorry. I'll try to do better next time. "
I may be the one who is wrong here because I never got Jerry Lewis either (except in The King of Comedy , where he played himself). IMDB has it at 5.6 and Rotten Tomatoes has it at 36%.