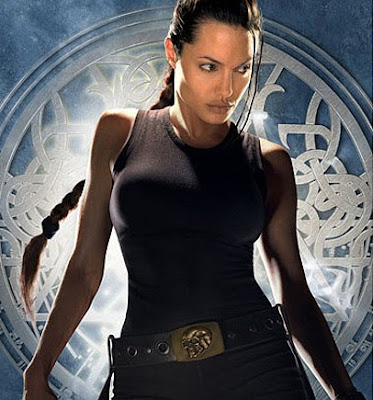 "Here is a movie so monumentally silly, yet so wondrous to look at, that only a churl could find fault." Roger Ebert

Call me a churl (dictionary.com - a rude, boorish, or surly person).
This is the kind of movie that is right up my alley. Action, adventure with archeology thrown in! The Indiana Jones movies, which this sought to replicate, are some of my favorites, But, this movie was no Indiana Jones.
Roger said in his review "And please don't tell me it makes no sense. The last thing I want to see is a sensible movie about how the Illuminati will reunite the halves of the severed triangle in order to control time in the ruins of the ancient city that once rose in the meteor crater--if, and it's a big "if," the clue of the All-Seeing Eye inside the hidden clock can be used at the moment of planetary alignment that comes every 5,000 years, and if the Tomb Raiders are not destroyed by the many-armed Vishnu figure and the stone monkeys. The logic is exhausting enough even when it doesn't make sense."
He finishes by saying "Did I enjoy the movie? Yes. Is it up there with the Indiana Jones pictures? No, although its art direction and set design are (especially in the tomb with all the dead roots hanging down like tendrils). Was I filled with suspense? No. Since I had no idea what was going to happen, should happen, shouldn't happen or what it meant if it did happen, I could hardly be expected to care. But did I grin with delight at the absurdity it all? You betcha."
I didn't grin at all as I watched this movie. I don't think Leonard Maltin grinned either. In his review he said "To quote a character in the film itself, 'Enough of this twaddle!'"
I like Angelina Jolie too, but please put her in something decent. This has a 5.4 on IMDB and a 19% from the critics on Rotten Tomatoes.