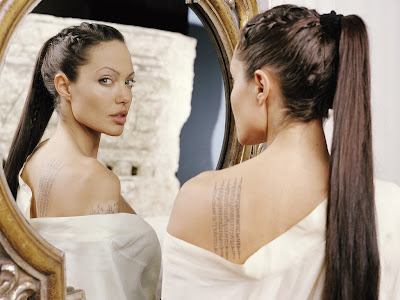 On Meta-Critics.com Roger had the highest rated reviews for both of the Laura Croft movies. On Meta-Critics Roger also rated Angelina's last 15 movies (since 2000) 21.5 points higher than the other critics!
So there you have it. Stick Angelina in a movie and Roger is going to add a couple of stars to it.
He said of The Cradle of Life in his review "This is a better movie than the first one, more assured, more entertaining. The director is Jan de Bont (Speed), who demands a certain logic from his screenwriters, so that although the story is completely preposterous, of course, it is consistent within its own terms. I was relieved to discover I am not tired of movies like this after all. They have to be good, is the thing!"
I've read what Roger said above several times, but I still don't understand it. Completely preposterous but has a certain logic?
I like Angelina too but I'm not going to watch this movie again to try to find the logic in it. In his review Leonard Maltin said "Astonishingly inept and interminable sequel gives new meaning to the word 'boring'."
This movie has a 24% rating on Rotten Tomatoes with the critics and a 5.2 rating on IMDB.