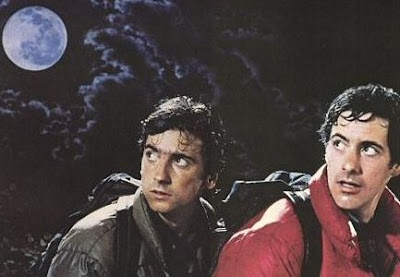 Two young American students, David and Jack, are walking Great Britain and they end up in a pub, The Slaughtered Lamb, where the locals try to warn them about going out at night.
When they do go out they are attacked by a wolf, Jack is killed and David is wounded. David begins to have weird dreams. He is stalking a deer and the eating it raw. Nazi zombies are attacking his family and his nurse. The light tone the movie started with is gone and things are starting to get scary. Then Jack appears and warns David about the werewolf curse. The last remaining werewolf, David, must be killed or Jack has to walk the earth. Jack warns David that he will turn into a werewolf and kill others. He tells him to beware of the moon. David thinks Jack's appearance was another dream.
In his review Roger says "An American Werewolf in London seems curiously unfinished, as if director John Landis spent all his energy on spectacular set pieces and then didn't want to bother with things like transitions, character development, or an ending. The movie has sequences that are spellbinding, and then long stretches when nobody seems sure what's going on. There are times when the special effects almost wipe the characters off the screen. It's weird. It's not a very good film, and it falls well below Landis's work in the anarchic National Lampoon's Animal House and the rambunctious The Blues Brothers. Landis never seems very sure whether he's making a comedy or a horror film, so he winds up with genuinely funny moments acting as counterpoint to the gruesome undead. Combining horror and comedy is an old tradition (my favorite example is Bride of Frankenstein), but the laughs and the blood coexist very uneasily in this film."
Combining horror and comedy is a hard thing to do, but I think this movie does it very well. The horror scenes, the witty dialogue, the moon themed music, the tremendous Oscar winning special effects - they all work for me.

Did you ever see The Wolf Man?
Is that the one with Oliver Reed?
No, the old one.
I don't think so.
Bela Lugosi bites Lon Chaney Jr and he turns into a werewolf.
Why are you telling me this?
No, listen.
Claude Rains is Lon Chaney's father, and he ends up killing him.
So?
Well, I think that a werewolf can only be killed by someone who loves them.

Some really good comedy scenes and some really good horror scenes. It isn't as good as the Bride of Frankenstein, but it is still very good.
It has a 7.5 rating on IMDB and an 88% rating with the critics on Rotten Tomatoes.

Gene Siskel and especially Roger Ebert are one of the worst movie critics. They always seem to rate down films that has a dark element or and not lighthearted and has sick twists. The irony of this is that one of the most things if you ask me especially that makes those films great. The blend of horror and humor in Beetlejuice and especially An American Werewolf In London is what makes those films so good. Putting aside of course that in An American Werewolf, the transformation scene is still to this date easily the best on movie screen. Not that these 2 care much about art unless it is socially or politically motoviated, it is so pathetic actually. This guy gave a higher rating to some really crappy disney films than this film, like wtf!

Your rating is way more accurate for this film than Roger’s, silly Ebert. This was a good film.