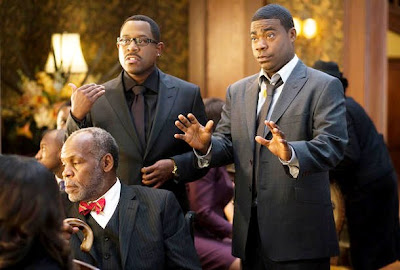 Danny Glover, Martin Lawrence, Tracy Morgan, Chris Rock, Luke Wilson ... in a comedy, it should have been good with that cast, but it wasn't. It was kind of frustrating to see all that talent assembled without really having anything for them to do.
In his review Roger said "Oh, I know a lot of Death at a Funeral is in very bad taste. That's when I laughed the most. I don't laugh at movies where the characters are deliberately being vulgar. But when they desperately don't want to be--now that's funny. Consider the scene when Uncle Russell eats too much nut cake and is seized by diarrhea. And Norman wrestles him off his wheelchair and onto the potty, and gets his hand stuck underneath. Reader, I laughed. I'm not saying I'm proud of myself. That's not the way I was raised. But I laughed."
He went on to say "I laughed all the way through, in fact. This is the best comedy since The Hangover, and although it's almost a scene-by-scene remake of a 2007 British movie with the same title, it's funnier than the original." (the British version has 7.3 rating on IMDB).
I enjoyed seeing the great talent that was on the screen but they were let down by the writing. It just wasn't that funny. Most of the humor centered around the dead father having been gay, on the "down-low" or juvenile bathroom humor. It really just wasn't that funny. Richard Roeper, in his review, said "The stellar cast is wasted on scatological humor, running jokes that are run straight into the ground, and corpse-centered slapstick that's less inspired than Weekend at Bernie's.
Roger seems to like director Neil LaBute. He gave the very mediocre Lakeview Terrace, which has a 6.3 rating on IMDB, 4 stars.
Death at a Funeral has a 5.3 on IMDB and a 40% rating with the critics on Rotten Tomatoes.