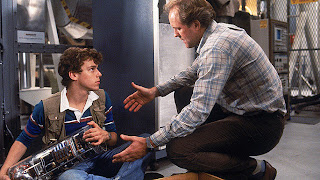 The Rotten Tomatoes synopsis says "Directed and cowritten by Woody Allen collaborator Marshall Brickman, this comedy-thriller doesn't seem to know where it wants to go or what it wants to say (other than, obviously, nuclear weapons are scary things). Christopher Collet plays an overachieving high school student who decides to show just how dangerously easy it is to construct a nuclear device. He builds one for his science fair, using his mother's relationship with a government official (John Lithgow) to sneak into a secret facility and steal plutonium. When the feds find out what's going on, they overreact in a brutish showdown that threatens nuclear annihilation of everyone within a 10-mile radius. While the movie makes some antinuke points and features a strong performance by Lithgow, it seems a little too breezy, given what's going on."
The main problem with the movie is that it is slow moving and the kid who is supposed to be the hero, is a brat who is hard to cheer for. Marshall Brickman, who wrote Manhattan and Annie Hall, didn't do so as well when he tried to write for the teenage set. This movie was no where near as good as a similarly themed movie, War Games (1983), which was made just a few years earlier.
In his review Roger said "The Manhattan Project was co-written and directed by Marshall Brickman, the sometime Woody Allen collaborator (Annie Hall, Manhattan) whose own films include Lovesick and Simon. This movie announces his arrival into the first ranks of skilled American directors.
It's a tour de force, the way he combines everyday personality conflicts with a funny, oddball style of seeing things, and wraps up the whole package into a tense and effective thriller. It's not often that one movie contains so many different kinds of pleasures."
This is usually the kind of movie that is right up my alley, but for me this one went right to the gutter. On IMDB it has a 5.9 and Rotten Tomatoes it has a 47% rating.
By the way, the highly skilled director, who just joined the first ranks, only directed one more movie fifteen years later, Sister Mary Explains It All (2001). I don't think that one was too good either.