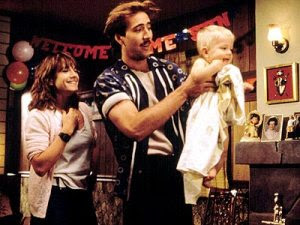 This early Coens' brothers' movie starred Nicholas Cage, Holly Hunter, Frances McDormand and John Goodman. It was definitely off beat, but it was really, really good.
When it first came out I didn't know what to make of it. It was one of those comedies that at first was a little hard to spot as being a comedy because the actors played it so straight. There have been many movies with this tone in the last twenty years, but this was one of the first. Tongue planted very firmly in cheek.
What I like about the Coen brothers' movies is that so many of the absurd things happening in their plots is not so far removed from real events happening in the news. Their movies point out how absurd the world can really be.
Roger said in his review "The movie cannot decide if it exists in the real world of trailer parks and 7-Elevens and Pampers, or in a fantasy world of characters from another dimension. It cannot decide if it is about real people, or comic exaggerations. It moves so uneasily from one level of reality to another that finally we're just baffled. Comedy often depends on frustrating the audience's expectations. But how can it work when we don't have a clue about what to expect - when the movie itself doesn't know what is possible and what is not? "Raising Arizona" is the new work by the Coen brothers, Joel and Ethan, whose previous film was the superb thriller "Blood Simple." That was a movie that pushed reality as far as it could go within the rigid confines of a well-made thriller. "Raising Arizona" needs the same kind of restraint. It's all over the map. If the same story had been told straight, as a comic slice of life, it might have really worked."
Roger only gave this gem 1 1/2 stars. I think this is one that he would like back.

I honestly wasn't a big fan of this movie. I agree with Ebert's review.

Agree with Liam, it has an unruly energy, uber-wacky but weak comedy.

In many of his essays, Roger pointed out that his peers and readers often assured him he was wrong about Raising Arizona. I think it's a wonderful movie, a hilarious and sad fairy tale loaded with incredible comic performances, but I know a lot of folks who hate it. I think it all has to do on whether or not you buy into that clearly artificial world.

Movies generally have to be a hyper-extension of reality so that it has the same impact on the viewer as it would if you actually lived in the situation. This movie doesn't work for a lot of people who really don't know poor white trash who live in the Southwest. I know these people and as a result find the movie spot on and funny as hell.

Ebert was right. It was a very weak comedy.

When you watch a movie that's not funny enough to be a comedy and not serious enough to be a drama, odds are that you're watching a satire. These movies often get praised for reaching sophisticated levels of comedy. Don't fall into that trap--if you're not laughing it aint funny. These kinds of movies are a whole lot more funny in concept than execution. A couple modern examples are Tusk and Swiss Army Man. When I listened to Kevin Smith coming up with the concepts of Tusk on youtube, the ideas were hilarious. In practice, no so much. I did find Raising Arizona entertaining, but satires are played too straight to garner enough laughs.