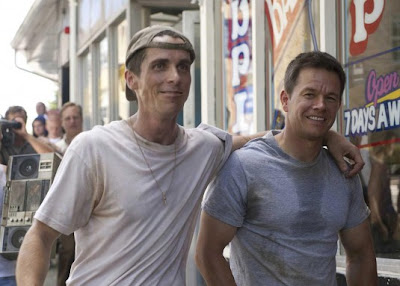 I'm not a big fight fan. I think it is a brutal sport and I find it hard to watch, but I loved The Fighter. The movie worked for me on many levels. It had some tremendous acting. Christian Bale's performance was brilliant. Melissa Leo, Amy Adams and Mark Wahlberg were also all really good. The movie is well worth seeing just for the performances alone.
I also thought the movie was an excellent fight film. I thought the fight scenes were really well done, and really brought home the pain and brutality that takes place in the ring. The movie was also effective in showing the devastation that drugs can have on one's life. Dicky was a character who had hit rock bottom because of his drug fueled life style.
Roger says in his review "The weakness of the film is the weakness of the leading role. That's not a criticism of Mark Wahlberg, who has a quite capable range, but of how he and Russell see the character. Micky comes across as a proud, not very bright, very determined man who has apparently never given his family much constructive thought. To say of your family, 'they're my family!' is true enough, but may not be sufficiently analytical. His love for Charlene is real, but he never quite realizes he really must choose between her vision and his mother's. His character remains strangely unfocused."
I disagree with Roger since the movie was based on a true story. To say a character should have acted another way doesn't make any sense if that is not the way the real person acted. Micky is a character who tries to please everyone around him. His older brother is his hero and his mother is a dominating figure in the lives of everyone in her sphere.
Roger finishes his review by saying "There are a lot of fight scenes, not as visceral as those in Raging Bull, Rocky or The Wrestler, but designed more to represent the POV of a sportswriter or fan. Because we aren't deeply invested in Micky, we don't care as much as we should, and the film ends on a note that should be triumph but feels more like simple conclusion."
It's funny, because I felt exactly the opposite. I really felt connected to this character, who was so anxious to please everyone, and was used by all those around him as they tried to realize their dreams through him.
The film received 7 Academy Award nominations, including Best Picture, Best Director, Best original Screenplay along with 3 acting nominations for Bale, Adams and Leo. Sports Illustrated dubbed the film the best sports movie of the decade and "one of the best since Martin Scorsese backlit Robert De Niro's Jake LaMotta in Raging Bull." It has a 90% rating on Rotten Tomatoes and an 8.1 rating on IMDB.